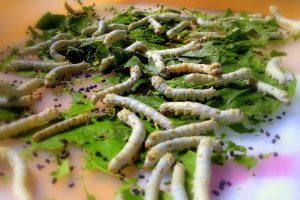 Silk is spun from the cocoons of silkworms which they have spun to transform from caterpillar to silk moth. The pupae are killed and removed from the cocoons, which are then soaked and spun into silk fibres.

There are several kinds of wild silk, but these give a much smaller amount of silk, so cultivated silk is far more common from harvested silkworms. Silk is produced in many countries around the world, but China and India produce the most silk annually.

World War 2 interrupted the silk trade from Asia, making silk prices increase rapidly. This led the US industry to look for synthetic alternatives such as nylon which is used extensively today.

Silk is one of the strongest natural fibres but loses 20% of it’s strength when wet. It has poor elasticity, and if stretched will remain like that. It is a poor conductor of electricity and is therefore susceptible to static cling. It is a smooth, soft fibre with a high sheen but is not slippy like synthetic alternatives. It has been used since ancient times and is still a highly popular fibre.

Perran Yarns include many silk blend bases such as: