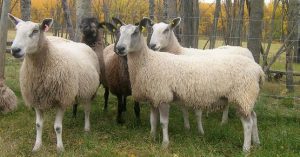 The Bluefaced Leicester is a longwool breed of sheep which originated from Northumberland around the beginning of the 20th century. They have long curly threadlike wool which is dense but lightweight and lustrous. It is often likened to mohair because of its softness.

Sign up to our newsletters to hear about special offers, events, and regular monthly knitty news.